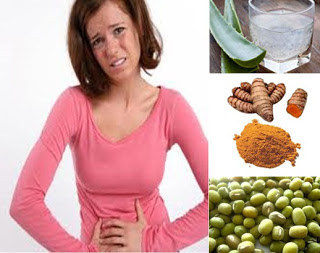 Ulcer disease affects many people have high activity, so their lifestyle and irregular eating. Ulcer disease can be known from the characteristics stomach bloating, nausea to vomiting, midriff pain, frequent belching, quickly feel full and hungry.

there is some reason why ulcers can occur :

There are some natural ingredients / herbs that can be used to cure ulcers. In addition to getting natural materials are also free from chemicals that can increase the emergence of new diseases caused by the use of chemicals. Here's Health Tips Natural Medicines Ulcer Disease.

1. Turmeric
Turmeric for ulcer drug, including the most well known natural remedy for treating the ulcer disease. curcumin and curcuminoids (active ingredient of turmeric) as well as essential oils shown to have antioxidant effects, antibacterial, anti-inflammatory and anticancer so either consumed as a cure for ulcers and other health problems.
Usage: Take 2 segment turmeric, peeled, cleaned and grated turmeric, add lukewarm water and squeeze to take out the juice. Drink twice a day, in the morning before eating and at night before bed.

2. Aloe vera
Aloe vera to ulcer drug, content aloin, aloin-emodin, resins, tannins, and polysaccharides in aloe vera good for treating stomach ulcers. Other active substances identified as Aloctin Aloctin A and B. Aloctin A inhibits secretion of gastric acid and pepsin when given intravenously in mice. Another potent ingredient is Aloin and Anthraquinone that can increase the production of prostaglandins. In addition, aloe vera has anti-inflammatory properties. Aloe vera gel contains bradykinase, which is a source of inflammation enzyme breaker, Bradykinin.
Usage: Peel the skin and aloe vera to clean the mucus is reduced, Boil until cooked (boiling water). Serve by adding honey to lessen the sense of bitterness or juice can also be used to add honey.

3. Plantain
Plantain for ulcer drug, on plantain contained substances that are antitukak ulcer, a high content of pectin in bananas may protect against the effects of gastric mucous membrane of stomach acid.
pengggunaan: select bananas that are old and not yet mature, dry banana by banana peel. cut into small pieces as a way of dried chips (not directly under mathari, aerated enough), after dry powder can make mashed or blender. Take two tablespoons of banana powder, mix with honey, consumption twice a day morning and evening.

That's Health article about a natural remedy for heartburn. Unruk Pregnant women are advised to consume no more than because it can result in less good for the fetus and should consult first with your medical doctor. Ulcer disease can be prevented with regular life lifestyle and healthy food and avoid stress, may be useful.